Good cigars require at least two things: good tobacco and expert tobacco rollers. To see where the good tobacco grows, you can go to Vinales in the wild west of Cuba. Take a tour bus from Havana (which I did) or, (if you want to stay overnight in Vinales) a long-distance collective taxi arranged by your casa particular in Havana. Vinales is only a couple of hours from the capital. As you ride through the relatively flat fertile landscape of  province Pinar del Rio, you will start to see little houses painted in pastel colours and surrounded by fields.

These are tobacco farms. END_OF_DOCUMENT_TOKEN_TO_BE_REPLACED

You might expect that in a socialist country like Cuba there wouldn’t be a place for religion. That’s what I thought, too, when I first visited the country in 2008. Churches looked closed; people didn’t seem to be wearing crosses. But then in early 2011, quite by accident, I found myself travelling by ferry across Havana harbour to Regla, a district apparently known for its church.

The people standing in the passenger room of the ferry were normal-looking Havana citizens – not middle class, not poor – just dressed in informal, colourful, body-tight clothes. But as the oily ferry made its way across the harbour’s rainbow oil slicks, the female passengers, a clear majority,  started pulling on shawls and knee-length skirts, unwrapping bouquets, tying up their long, wild hair and lowering their voices. By the time we docked on the other side, they had transformed themselves into pious worshippers ready to enter the church of Nuestra Señora de Regla. END_OF_DOCUMENT_TOKEN_TO_BE_REPLACED

After Havana and beach resorts along Cuba’s north coast, most tourists will want to see the town of Trinidad. Why? Because, with loads of historic charm, its cobble-stoned center is small, walkable and traffic-free; it’s also extremely photogenic and feels totally authentic. Maybe you won’t be transported back to 1513, the year Trinidad was founded, but you will certainly feel as though you’ve stepped back into the early 1800s, when Trinidad reached its economic zenith due to the sugar-boom. 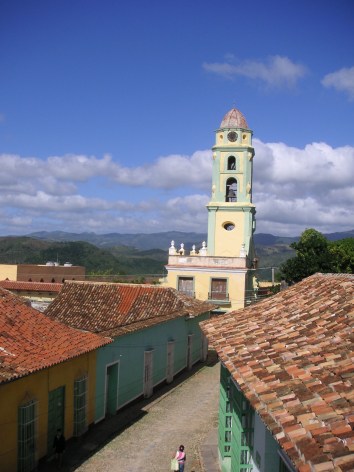 Sugar brought Trinidad European immigrants and new wealth, but also the African slaves whose labour created that wealth. Today you can see a few of the mansions built by the sugar barons, containing rich furnishings imported from Europe; several are open to the public as museums. And if you are really observant, you can – sadly – also witness vestiges of slavery on the former sugar plantations, in the form of manacles, bells and watch-towers.

What makes Trinidad especially picturesque are the rows of more ordinary houses, one-storey buildings built right out to the sidewalk or street, with their window grilles made of iron or wood. END_OF_DOCUMENT_TOKEN_TO_BE_REPLACED

Ernesto next suggested a trip to the Zapata Peninsula – to the “Swamp of Cienaga”, to be exact. Presumably he thought I needed to see a tourist attraction with more excitement than lakes, bird-filled forests and waterfalls. So after driving for at least an hour in the fast lane of the pot-holed and badly patched six-lane highway known as the autopista, we turned off towards Australia… that is, the village of Australia, Cuba. Apart from slaloming around potholes, it had been a fairly peaceful drive, during which we’d only encountered a handful of other cars and the occasional highway worker, machete in hand, cutting back the flowering bushes on the centre strip.

In Australia, a roadside policeman flagged us down for a document check. We held our breath while it was established that Ernesto’s papers and permits were all in order,  freeing us to continue down this smaller road, past ox-carts, farmers on horseback or bicycles and uniformed school kids being transported in farm wagons. END_OF_DOCUMENT_TOKEN_TO_BE_REPLACED

The first time he took us to Lake Hanabanilla, our taxi driver Ernesto negotiated us a great deal with a motorboat driver ($25 for the day) and we started off on the two-hour ride to the waterfall at the other end of the lake. After we’d explored the waterfalls and were on our way back down the lake, our boatman steered close to the limestone cliffs on the far side. Then, he cut the motor, stood up, and seemed to be searching the narrow, sun-baked ledges.

Finally, after a bit more ledge study, he said something about a “maja de Santa Maria”. At those words, Ernesto became electrified and started fumbling in his backpack. With an old camcorder in his stubby fingers, he stumbled up onto the prow of the motorboat, which was still bobbing around in its own wake.

While Ernesto was balancing on the prow, trying to video something, I asked my friend Julian what a “maja de Santa Maria” was. I couldn’t see anything. “A snake – a really big snake” was his answer. It turned out to be a Cuban boa (see note below). 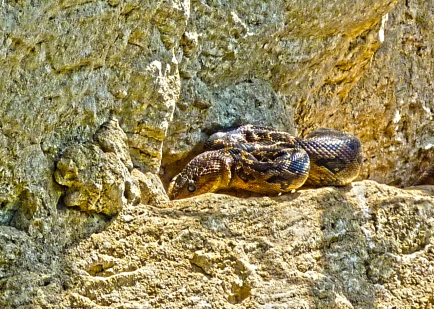 Then I saw it. The snake was at least 6 – if not 8 – feet long. It had been lying, looped over itself, on a ledge a little above our heads, but with all the commotion of the motor and human voices, it had started to slowly  unwind itself and slither along the ledge. END_OF_DOCUMENT_TOKEN_TO_BE_REPLACED

That’s Ernesto above – the Santa Clara taxi driver who made my visits to Cuba so much better. He took us to the most picturesque places in Central Cuba: to national parks with hiking trails, lakes and waterfalls, to the northern beaches, to colonial towns like Trinidad, Remedios and Sancti Spiritus, to cultural treasures like Cienfuegos and the Harvard Botanical Gardens.

Every morning, at whatever hour we’d set the evening before – 8.00, 8.30 – Ernesto would honk the horn of his precious white Peugeot in front of the door of our casa particular and sit there patiently till we’d gathered up our stuff and piled into the car. END_OF_DOCUMENT_TOKEN_TO_BE_REPLACED

This post features tips about places you will probably consider visiting in Havana, whether you are travelling alone or with a guided group. Your guide book (or my book Travels in Cuba) will have more background information, but my insider tips will hopefully help you get more pleasure out of your visit.

If you like taking dramatic black and white photographs, you should visit the Cemetery of Colon in Vedado, which is overflowing with extravagant white marble statues and mausoleums from the 19th and 20th centuries. The cemetery is vast and park-like and contains the elaborate tombstones of famous as well as not-so-famous Cubans.

One tomb you shouldn’t miss is that of Amelia Goyri, a well-to-do lady who died in childbirth and was buried with her child. Her fame is based on two miracles connected with her burial.  The grave is marked by a life-size statue of Amelia holding a baby in one arm and a large cross in the other. Local people – mostly women – visit the grave to pray for the health of mothers and babies, leaving flowers at the feet of “La Milagrosa”, the miraculous one. END_OF_DOCUMENT_TOKEN_TO_BE_REPLACED

Let’s talk about money. How much do things cost in Cuba? Well, prices can vary considerably.

Luxury beach hotels are certainly not cheap. You can pay from $100 to $300 a day for a double room with meals. But, as this blog keeps telling you, touring Cuba doesn’t need to be wildly expensive. You can stay at a clean and welcoming casa particular (a room with bath in a private home) for about US$25 a night. Food is not expensive either. Main meals are anywhere from $8 to $20, depending on the type of restaurant. And you can even eat at your casa particular, enjoying some of the best meals available in Cuba.   Fruits like guavas, pineapples, papaya etc. are tasty and reasonable. Even fish and lobster aren’t expensive.  When you go out, a fruit juice in a café is $2; a beer is $1.50. A taxi ride through Havana starts at $5. By North American or European standards those are not high prices. Plus, they have the added advantage of giving Cubans jobs and a decent income. END_OF_DOCUMENT_TOKEN_TO_BE_REPLACED

Cuba is home to many exotic-looking birds, so it’s not really surprising that the Cuban national bird is colourful. It’s called the tocororo (to co RO ro).

The tocororo’s plumage may be exotic, but the bird can be found in forests all over Cuba. I came upon my first tocororo in a dry jungle in the Escambray mountains, near Topes de Collantes. Ernesto, our taxi driver, guide and friend, had taken us there for a refreshing walk before swooping down to sub-tropical Trinidad on the Caribbean coast.

You hear a tocororo before you see one; its call is a low, bubbling warble. Ernesto knew right away and stopped me in my tracks, whispering “Tocororo!” He then silently led me to within ten feet of the bird, which was sitting on a branch over the path. Fumbling with my daypack in excitement, I somehow whipped out my camera and took as many between-leaf shots as I could before the bird flew away. One of them is posted above. As you can see, tocororos are dark blue, white and cherry-red, with navy and white polka-dot wings and a very attractive forked tail. What you can’t see is that they also have an iridescent blue-green back.

For a better idea of the back, check out this much more professional photo. 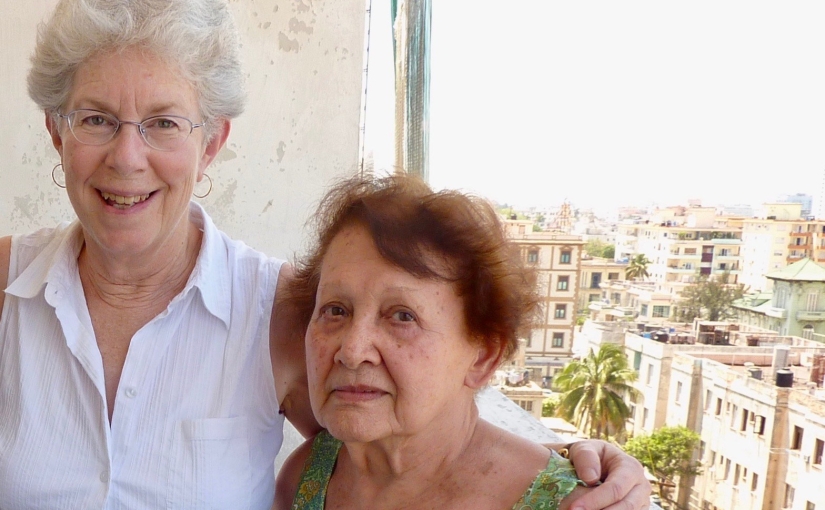 My very first ‘casa particular’ was on the tenth floor of a Havana apartment house, right across the street from the well-known Hotel Nacional, with its spacious garden, bars and restaurants, currency exchange, and email room. Living so near meant I often used the Nacional’s infrastructure: I could read in the breezy garden overlooking the sea, or send expensive emails back home to Switzerland and Canada.

My 75-year-old landlady, Magdalena, lived alone in a four-room apartment, with me as her only guest. Every morning at breakfast, she treated me to freshly pressed papaya or guava juice and lots of Spanish conversation, which sometimes turned into a cross-examination on my private life. Anyway, it did my very elementary Spanish a lot of good, and I learned all about Magdalena and the conditions of daily life in Cuba: where she shopped, where her three grown-up children lived, what to see in Havana, where I should be careful.

Later in the day, when I returned from one of my many sightseeing trips to Habana Vieja, there’d be some small treat waiting for me from the dinner Magdalena had cooked for herself and her granddaughter: maybe a slice of flan, which she called ‘poodeen’, or a dish of sweet potato chips.

On the evenings when I didn’t go out, Magdalena and I would sometimes sit side by side in the living room, watching her little old Sanyo TV. There were only five channels, two of which were monopolized by talking heads. That left the Cuban dancing channel, a Brazilian soap opera or news reports. The TV content may not have been scintillating, but we found lots to talk about anyway. Magdalena was refreshingly critical of all government announcements.