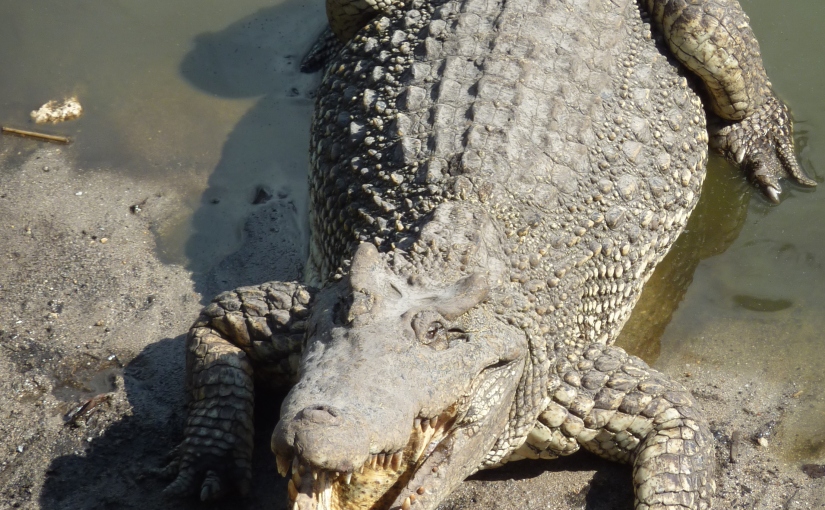 Ernesto next suggested a trip to the Zapata Peninsula – to the “Swamp of Cienaga”, to be exact. Presumably he thought I needed to see a tourist attraction with more excitement than lakes, bird-filled forests and waterfalls. So after driving for at least an hour in the fast lane of the pot-holed and badly patched six-lane highway known as the autopista, we turned off towards Australia… that is, the village of Australia, Cuba. Apart from slaloming around potholes, it had been a fairly peaceful drive, during which we’d only encountered a handful of other cars and the occasional highway worker, machete in hand, cutting back the flowering bushes on the centre strip.

In Australia, a roadside policeman flagged us down for a document check. We held our breath while it was established that Ernesto’s papers and permits were all in order,  freeing us to continue down this smaller road, past ox-carts, farmers on horseback or bicycles and uniformed school kids being transported in farm wagons.

Our first visit was to a large lake with an island, where a Taino village had been re-created. (“Taino” is the name of a group of native people living on the island of Cuba when it was settled by Europeans.) We spent some time walking around the displays on the  island, and finally found ourselves trapped in an embarrassing native-dance-and- face-painting ceremony. This meant that, despite discreet wipes, when we later entered the Criadera de Cocodrillos (the crocodile farm), our faces still sported the odd yellow or red stripe.

The croc farm’s first display consisted of baby crocs in a way-too-small basin, attempting to bite each other’s noses off. Next came the child crocs – about 3 feet long – which visitors could hold (bound and gagged) for a photo. 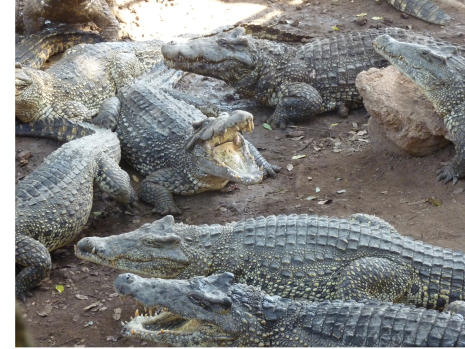 A high arched bridge took us to the lake, where dozens of huge, evil-looking adult crocs were “resting” on the shore.  A chain-link fence enclosed the lake, so I felt fairly secure about photographing the reptiles, who had an unnerving habit of holding their jaws open in order to snap them shut on passing flies. We were soon joined by a small group of Russian tourists wearing brand new outfits and all kinds of bling. The croc farm wardens then zoomed into action and started “feeding” the crocs by waving whole fish filets dangling from long poles over the crocs’ heads. A snapping frenzy followed, and once in a while a croc would even catch a flying filet.

Keen to take pictures, the Russians pushed forward and held their phones over the fence; we remained at the back. It was then that one of the Russian ladies dropped her pink-clad iPhone into the croc enclosure. She cried o 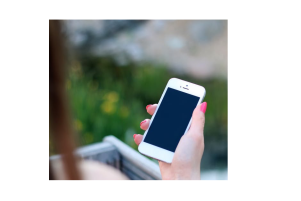 ut of course, and the others craned their necks to view it lying on the ground below, but no one knew what to do. Except the wardens. They quickly transformed their feeding poles into batons and started stomping the ground with them as they opened the gate into the enclosure. Baton-stomping continuously, they marched towards the massed crocs, who started backing off. Before the men could get near the phone, however, Ernesto deftly reached through the fence and picked it up, handing it back to the Russian damsel with a slight bow, his gallantry only slightly marred by a smidgen of  face-paint. The wardens didn’t look too pleased, but once again Ernesto had saved the day.