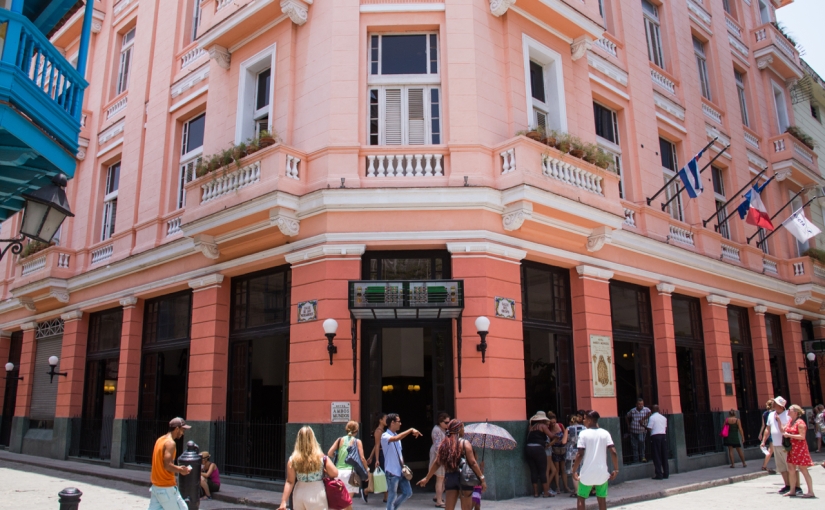 While wandering down Obispo in Havana’s picturesque pedestrian zone, Julian and I came upon a hotel with considerable character called ‘Ambos Mundos’.
“What does that mean?” I asked my Cuban friend.
“Yes, it’s a strange name,” he answered, “It means ‘both worlds’, as in the best of both worlds.”

It turns out that Ernest Hemingway, the American author most closely connected with Cuba, lived at the Ambos Mundos from 1932 to 1939. It’s where he started writing his famous book For Whom the Bell Tolls. Later, after his marriage to the journalist Martha Gellhorn, he bought a large house outside Havana, but for seven years he maintained a room in the Ambos Mundos, a hotel frequented by artists and writers, which was also near his favorite bar, La Floridita.

Tourists can visit Hemingway’s room and see handwritten notes, a pair of glasses, Hemingway’s desk and typewriter, his bed and souvenirs he brought back from his travels abroad. I’m not a huge Hemingway fan, but it was a major thrill to find myself reading notes in the Nobel prizewinner’s handwriting and contemplating the very objects that were once so important to him.

A delicate golden “birdcage” elevator takes visitors upstairs to Hemingway’s room on the fifth floor or to the roof-top café, which is where I went with Julian after inspecting the minutiae of Hemingway’s life. A balmy breeze from Havana harbour was cooling visitors lounging at tables on the rooftop, and Julian and I were soon side by side, leaning over the low walls, identifying well-known buildings from a new angle. We could even see across the harbour to a fortress.

“We haven’t been over there yet,” I said. “I’d love to see all those places across the harbour.”
“Mhm, well in that case,” Julian answered gallantly, “I think the only thing you can do is come back to Cuba.”

Two years later I was back, crossing the harbour with Julian.