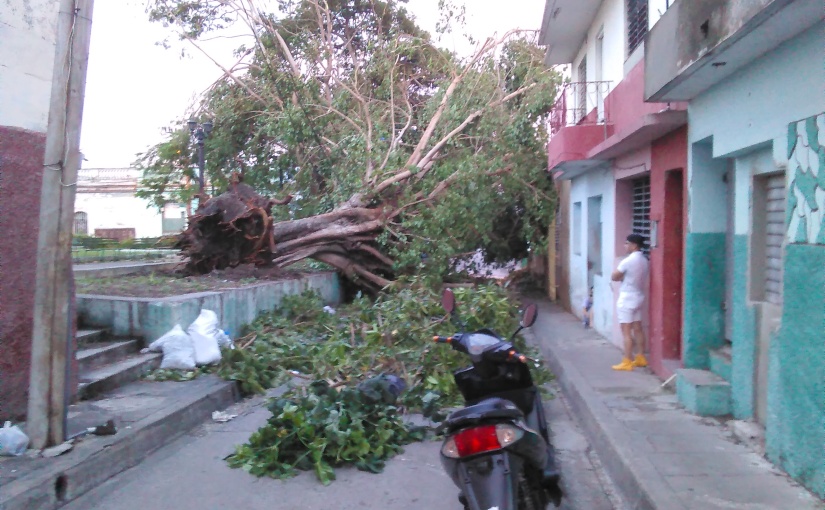 Hurricane Irma began her assault by striking Cuba’s north coast on September 8th, 2017, with 260 kph winds.  At that point, Cuban Hurricane Watch had been evaluating Irma for some time, finally triggering full civil defence procedures. But these could not stop Irma’s steady and violent progress as she churned popular resorts such as Cayo Coco, Cayo Santa Maria and Varadero into sandy chaos.

My Cuban friend Julian, who lives in Santa Clara, some 50 km inland from the northern coast, hunkered down with his family – his wife, 100-year-old mother, son and daughter-in-law – to wait out the storm. This was not their first hurricane. They had water and food, lanterns and flashlights, a gas cooker, a battery-powered radio… Here are excerpts from his emails, which started arriving as soon as the storm had moved on.

11th Sept. There are some fallen trees like these (see above) in Santa Clara, but not too many. Fortunately, as a security measure in the days before the hurricane, the most dangerous branches near houses and power lines were cut. … The power supply is a short-term problem and will be solved within days, but the destruction of agriculture will cause major difficulties.

13th Sept. Thank you so much for your messages. It is encouraging to know that we have friends who care about us. After 5 days of blackout, electricity returned early this morning. Water had come the day before. So, now we have the basic conditions for a civilized life. Everywhere people are working hard to repair the damage. Saturday (Sept.9) was perhaps the longest day in our lives here in Santa Clara. Heavy rain and strong winds began around 3 a.m. and continued until Monday morning. As soon as this situation began, there was a power cut and a water cut that continued until yesterday and today. The lack of electricity was the worst consequence for most people … Fortunately, I had a very good transistor radio with rechargeable batteries  – a present from a German friend  – that made it possible to listen to news about the situation all the time.
However, it is important to mention that the human losses were minimal compared to the power of this hurricane. In Cuba only 10 people were killed, 6 of them in Havana, and mostly because of imprudence or refusing to be evacuated. …The Cuban Civil Defense is very well organized to fight these disasters. Hundreds of thousands of people who live in vulnerable areas or houses were evacuated to safe public or private buildings, where food and medical assistance were provided.

22nd Sept. At home I may say that our daily life is back to normal, though there are some people who must be having a harder time. Yes, both at the peso markets and CUC stores there is basic food to buy, though in some cases there are long lines. …It is encouraging to know that a number of Canadians have also come to Cuba to help with rebuilding and rewiring. The reconstruction and repair work is going on well: more than 90% of homes have electricity, and a high percentage also have tap water. The subsidized food is also almost normalized, though we are already feeling the shortage of vegetables, as almost all crops were lost. Elementary schools have begun classes, as well as most universities.

For me, Julian’s emails illustrate Cubans’ lack of self-pity in dealing with major difficulties. I admire their courage and their concern for each other in the face of so many obstacles.